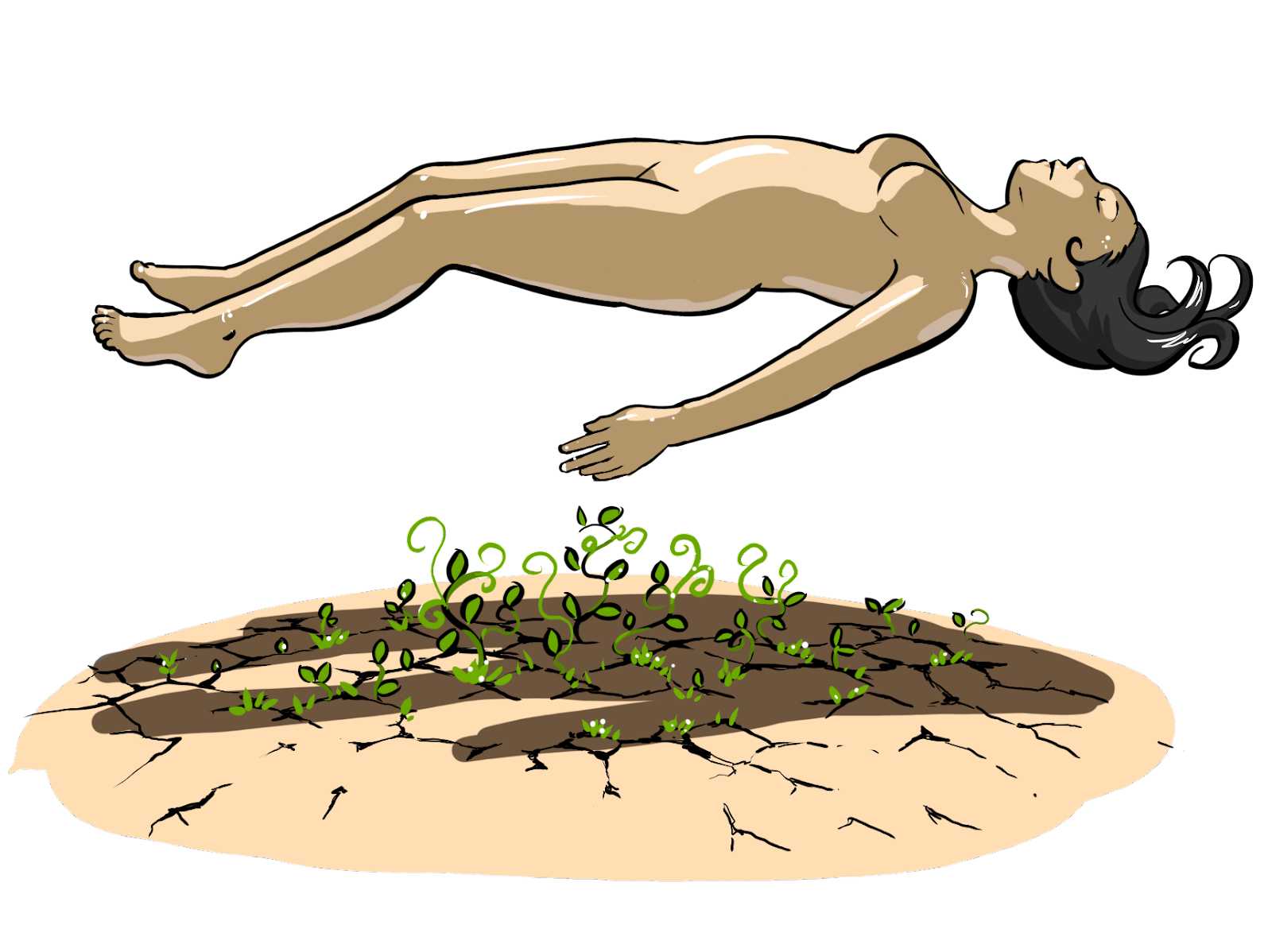 Serenity. That sounds nice, doesn’t it?

With 2020 not letting up as it careens to a close, serenity can seem like nothing but an out-of-reach pipedream – both in our own lives and in the world as a whole. It’s difficult to relax and focus on the present when so much of even the immediate future is uncertain. In times like these, though, fostering that sense of mindfulness and serenity is perhaps one of the most important things that we can do.

With so much of the chaos around us being outside of our control, it’s especially important to focus on those areas where we can have the most positive impact. As always, one of the most immediate places we can make the largest difference is in taking better care of ourselves. Even more precisely, cultivating our own mental health – our own serenity – is a very worthwhile endeavor.

When discussing mental health it can be tempting to talk about the negative symptoms of a certain condition, such as how stress, anxiety, or fatigue aggravate mental health issues. Rarely do we talk about improvements to mental health in strictly positive ways without comparing them to an existing negative. Something needs to be wrong in order for us to “fix” it.

This isn’t just a result of our culture: it’s baked into our psychiatric science and treatment as well. In the DSM-5, the reference manual for diagnosing mental disorders, a huge number of the disorders’ descriptions end with, “…and interfere with daily life.” What if nothing is wrong? Or, if something is wrong, what if it’s not bad enough to significantly interfere with your daily life?

It can be hard to remember that mental health isn’t an on/off switch. It’s a gradient, and even when you’re not suffering you still always have room to make things better for yourself.

Now, when we say serenity, you probably have some kind of mental image of meditation, or relaxation, or of Joss Whedon’s Firefly . All totally valid, but we’re really only focusing on the first two here. In addition to its cultural meaning, serenity is an actual scientific term. It’s something psychologists measure alongside other mental wellness markers – essentially it gauges how well we practice being present, how ready we are to offer forgiveness, as well as how content we feel with ourselves despite negativity in our lives.

Serenity also happens to be one of the many mental health factors that has been studied in recent floatation research. In 2018, were able to demonstrate the effect a single 60-minute float had on serenity, and we don’t think we’re overstating it by saying the results were impressive: 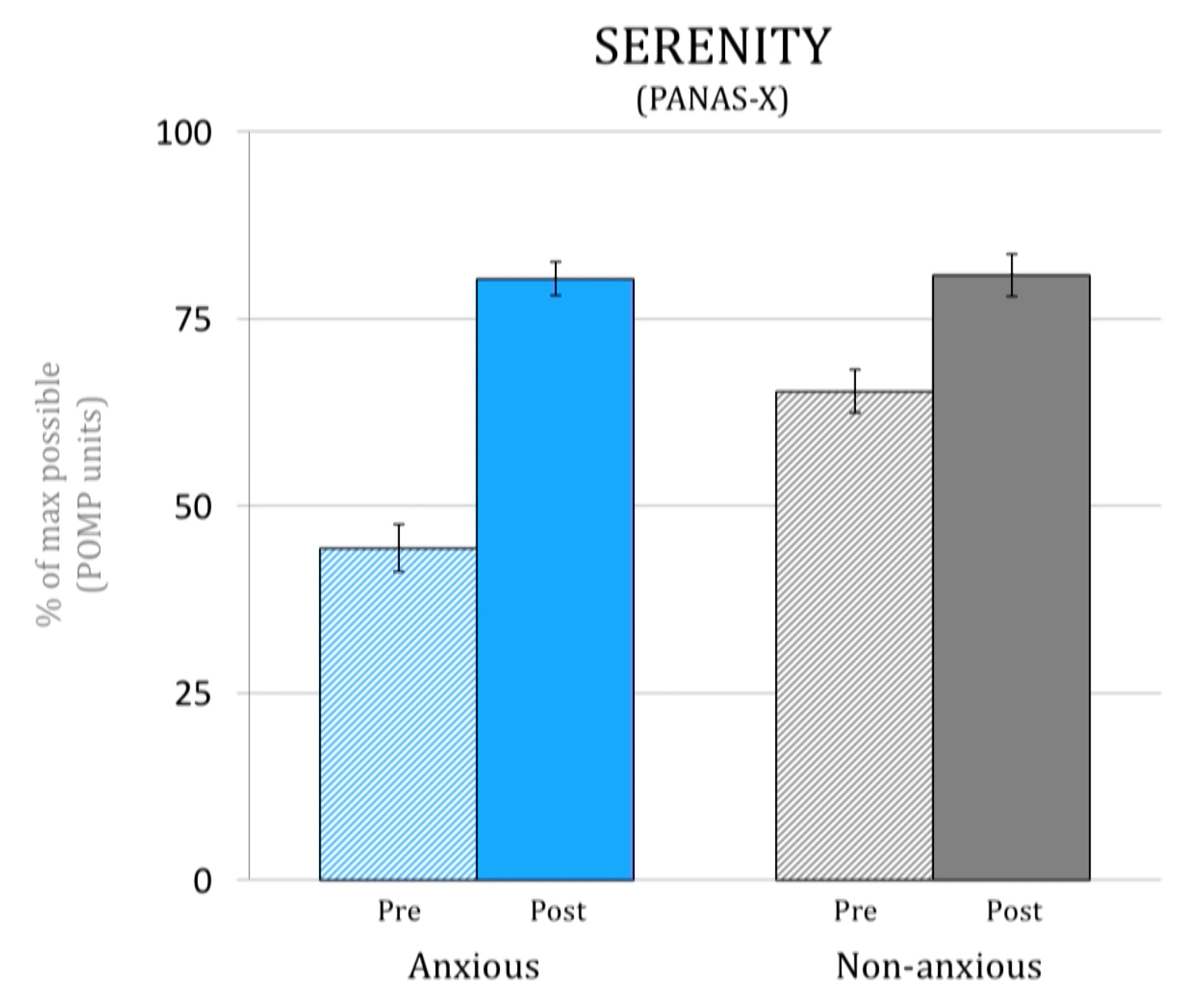 Perhaps even more impressively, when we look at the data from all 50 participants in the study, every single one saw an increase in serenity after floating. Nearly ¼ of the participants maxed out the scale post-float. The graph for all participants’ data shows just how impressive this is. The red bar indicates how serene they felt before the float session, and the blue shows the (often quite drastic) improvement. 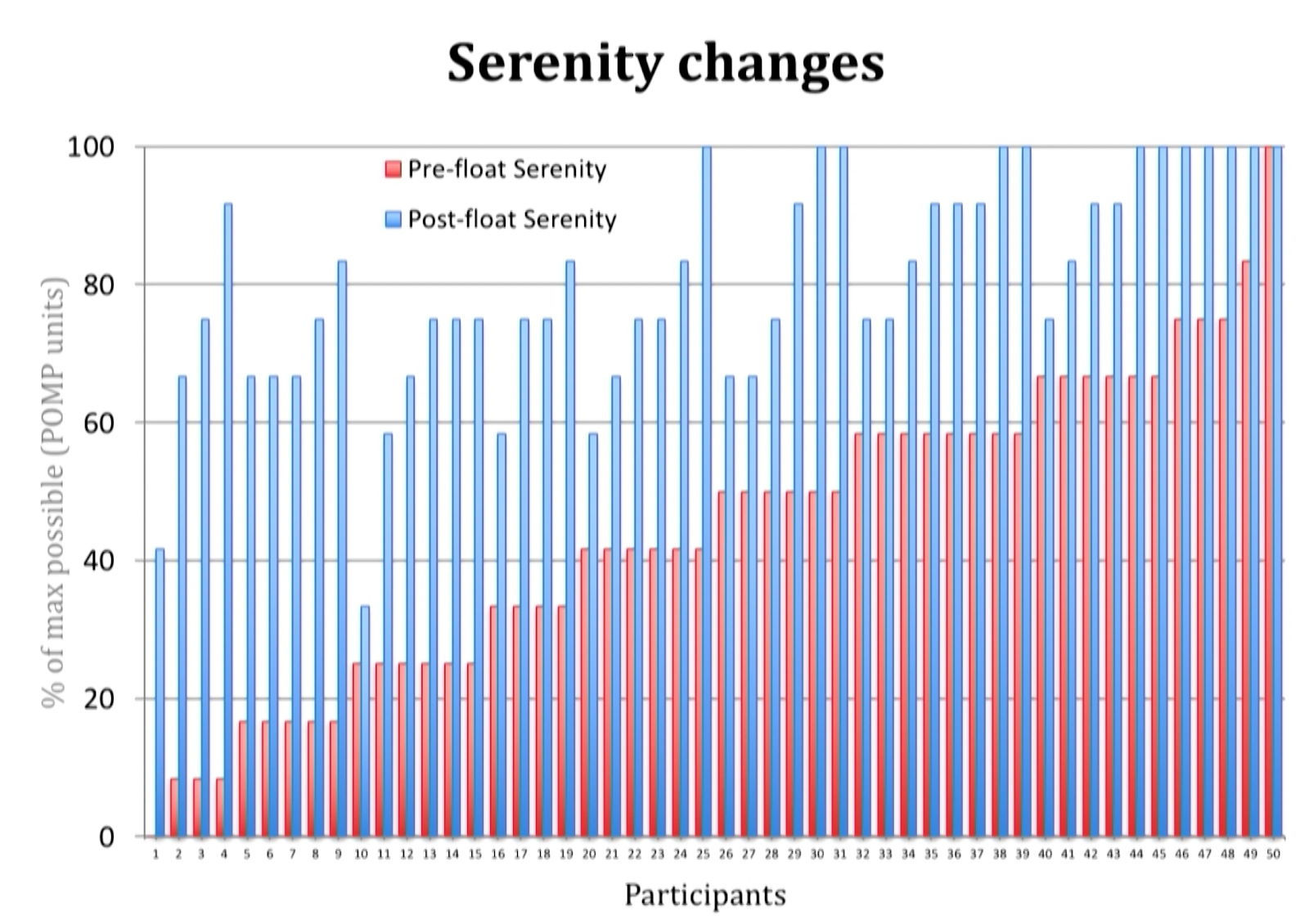 You can see a from this study here, and . Serenity was just one of many things studied, and the same sorts of impact are shown on decreasing things like anxiety and muscle tension while increasing relaxation and energy levels.

As a little teaser, here is a chart showing the negative and positive mental health traits impacted by a single float:

This year, and this holiday season, may be insane, but we as humans experiencing it can choose to make an impact where we can: in self-care. Whether that’s meditation, exercise, sitting by a fire sipping hot chocolate, or (as we are quick to encourage) hopping into a float tank.

Serenity isn’t as far away as you may think, but it does require you to set the stage for it by setting aside time for yourself.