This Pride, we thought we’d share a personal story from within the float community from someone who used floating to help her find herself.

Juliet Mylan is a trans woman who lives in Portland, Oregon and she has been gracious enough to share her experiences with floating and how it helped her understand her identity as a trans woman. This is her story:

My name is Juliet. My pronouns are “She/Her” and I’m transgender. 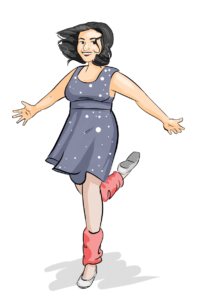 Most people are cisgender, which means they don’t battle with the thought that their body is wrong. A lot of people don’t understand what life is like for someone like me, so I thought I’d share how I came to understand myself.

Growing up, I didn’t have the language to understand these feelings. I didn’t even know what “transgender” meant. In my teenage years, as puberty hit, I started to feel like a stranger in my own body. Body and facial hair developed uninvited. My voice started to sound distorted and alien, making me not want to speak at all. In school, we would often be separated by gender for various activities and I always felt like I was in the wrong group. I convinced myself that this was normal. I actually thought that being a boy was just being born “unlucky” and that if anyone had a choice, they’d choose to be born a girl instead, even though I didn’t know any boys who felt this way.

These feelings became an internal monologue that played on a constant loop in the back of my mind like a mantra. Eventually it extended to how I felt about myself as a person and I developed self-esteem and mental health problems related to anxiety and depression.

As easy as it is to trace these problems back to my gender in retrospect, at the time it was harder to identify them among the jumble of my insecurities, like trying to pinpoint a single voice in a shrieking chorus. I was diagnosed with chronic depression and went into therapy.

Eventually, my mental health issues were so compounded that I was so focused on dealing with the symptoms, I didn’t even discuss my gender incongruence with my psychiatrist. They prescribed a whole host of different medications, but none of the antidepressants or antipsychotics helped. Of course they didn’t, they weren’t treating the real problem. I was labeled “treatment resistant.”

In my early 20s, I discovered floating. I heard that it was good for anxiety so I gave it a try. To my surprise, it actually worked! The float tank was the only place I could go that would quiet the internal monologue which otherwise dominated my day-to-day life. It also laid the groundwork for me to be able to reflect on my sense of self.

Over the next few years, I floated several times with mixed results. Initially, my floats were mostly peaceful, even euphoric, but my conflicted self-image could disrupt it at any moment. Instead of going quiet, occasionally the chorus of self-deprecation would perform in concert to the captive audience of my mind. There were times it was so bad that I had to get out of the tank early to calm myself down. 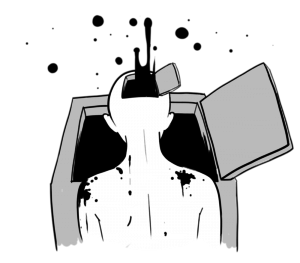 Some of the more passionate floaters I’ve known have questioned how people could have trouble staying in a float for the whole time. When you’re confident in yourself, it’s easy to be alone with your thoughts. When you don’t even know who (or what) you are – it can be a nightmare.

After 2012, trans people started to be more public. They won legislative rights and more people were able to transition. I even had friends who transitioned. It forced me to acknowledge that this was something I wanted too. I was raised to believe it meant something was wrong with me. I thought I could never be happy this way. Even if I could, I knew that there’d be judgement, discrimination, hate crimes… My trans friends all had horror stories about strangers or being disowned by their families. What would my family think? I was scared. So I tried ignoring it.

Eventually, I went out of town on an extended work trip. A few weeks into it, I met up with a friend and he offered a float to me in his personal float tank. After so much travel, I gladly accepted.

For whatever reason, this float was different. My mind was more malleable. I found myself in a deeply meditative state that let me reflect on my life almost like I was someone else seeing it for the first time. This perspective allowed me to look at my life and see why – even when so many things seemed to be going well – I was still so unhappy.

I had spent so much of my life trying not to admit these feelings. But now it was like trying to ignore a foghorn from a block away. I spent years hating the gendered aspects of my body, every day after I had hit puberty had been an awkward, painful mess. There was a clear direct link to these feelings and my self-image and how it had impacted my mental health. It seemed so obvious.

Alone, weightless in the dark, I laughed. I laughed so hard that I cried. For the first time in my life, I understood who I was. I was a woman. And much like a Magic Eye puzzle, once the solution came into focus, I wondered how I didn’t see it before.

I spent the rest of my work trip stealing away to do research. I learned that this wasn’t new, and in fact lots of major cultures throughout history have acknowledged gender non-conforming people. Native Americans/First Nations people have what is now referred to as “Two Spirit” identities, an umbrella term for the vast network of different multi-gendered identities that many tribes have had throughout history; Pacific Island cultures have so many different identities for gender variations that to list them couldn’t begin to do them justice; The Greeks had Hermaphroditus, the two-sexed god of marriage; even the Mesopotamians had the third gender “kur-gar-ra” (literally “man-woman”) in their creation myth. There’s nothing quite like seeing your identity discussed by an ancient civilization to make you feel like you’re not alone.

When I got home, I found a gender therapist who’d see me immediately, went to a clinic, and started hormone therapy. I can’t pinpoint when it happened, but after a few weeks, I felt better. The constant din of negativity that pervaded every waking moment was gone, and just like turning off a white-noise machine, I couldn’t even tell how loud it was until it stopped.

It’s been several years since then. While I look different, I’m still me. Moreso, in fact, if that makes sense. I find it easy to make conversation without worrying about how I’m being perceived. I’m no longer afraid of what I’ll find when I step into a float tank. And yes, I have experienced bigotry and discrimination, but I’ve also found more acceptance than I could have ever hoped for.

My transition has certainly been drastic, but I rarely think about my gender anymore. While it may seem counter-intuitive, transition has given me the ability to stop thinking about my body and actually enjoy myself and who I am. Finding myself in the darkness, after years of uncertainty and self-doubt has given me the freedom to be who I’ve always been afraid to be, without uncertainty or shame. I wouldn’t trade it for the world.