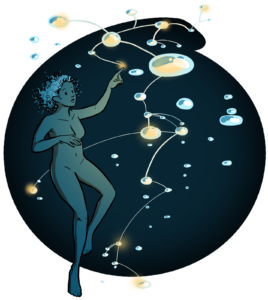 We tend to think of creativity as synonymous with expression (writing, music, art, etc.), but creativity is also how we respond to unusual situations, how to approach old problems in new ways, as well as how we share this information in a way that is both entertaining and informative.

Creativity is such a fundamental part of what it means to be human that we often take it for granted. Change is one of the defining characteristics of the human experience, and being able to adapt to it and think laterally when problems arise has shaped our history in both big and small ways. Innovations like flight, the internet, and homogenized milk were all expressions of creativity. It’s something we use daily, even if we’re not thinking about it: developing a sense of style, finding ways to automate your work, or even creating a unique Zoom background for your digital meetings are more everyday examples of how creativity influences our lives.

Floating has such an obvious effect on creativity, that it’s hard to find a float center that doesn’t celebrate it in some way, whether through float-inspired artwork on display, post-float journals for zen’d out floaters to express themselves in, or album releases of float-inspired music.

So what is the connection between floating and creativity? And how do you research something as nebulous and ubiquitous as creativity, anyhow?

For a long time, it was widely believed to be difficult (if not impossible) to manufacture creativity. Beautiful muses could apparently help, but it was still something intangible and unreliable. Either inspiration strikes or… it doesn’t.

For as long as written language has existed, we’ve struggled with how to make inspiration strike. The I Ching, one of the oldest texts in existence, is fundamentally about how to foster creativity to encourage change – in yourself and the rest of your life.

Despite being written thousands of years ago, many of the teachings are frighteningly contemporary. The text itself is non-linear and there’s a lot of debate about specific word choice in translation, which makes it difficult to quote out of context, but one of the fundamental principles it states clearly and repeatedly is a strong comparison between times of quiet rest and solitude and nurturing the mentality necessary to adapt to great change.

Saying that we should avoid distraction and overstimulation to foster creativity is not a new idea, as it turns out. In fact, it may be one of the oldest ones we’ve ever had!

Synthesizing an abstract and analytical approach

More recently, academia has taken a more methodical approach to looking at creativity. In 1954, poet and academic Brewster Ghiselin compiled a symposium,The Creative Process, from some of history’s creative heavy hitters, including such greats as Einstein, Van Gogh, and Mozart to name a few.

Ghiselin took these observations and attempted to make sense of the common threads that give spark to creativity. In an anecdote from Henri Poincaré about inspiration, Ghiselin was struck with the process that led to one of his most important discoveries in mathematics: “he lay unable to sleep and became a spectator of some ordinarily hidden aspects of his own spontaneous creative activity.” Ghiselin saw this as a fundamental part of unlocking creative potential, “though Poincaré was conscious, he did not assume direction of his creative activity at the stage described, and as it seems to have been a sort of activity not susceptible of conscious control, apparently he could not have done so.” In short, he’s making the same observation as the I Ching: when we seek out stillness, our minds work out the rest of the hard stuff.

But philosophy and essays are not research, and at the time, scientists didn’t really know how to study something ] as abstract as creativity. Psychology was still a very young and developing field, and it would be a few decades before anyone would publish peer-reviewed research on how floating impacts creativity and problem solving.

In 1987, that’s exactly what happened at the University of British Columbia. The researchers there found that h3psychology professors came up with more ideas after floating, and that those ideas were generally more creative , with every participant except for one finding their floats to have an extremely positive impact on their ability to create. These results were laterh3verified by the same researchers and replicated byh3other scientists at the University of Vermont . The Vermont study also found that people who floated were less likely to feel fatigued or frustrated by complicated problems.

Sweden’s Karlstadt University, one of the leading float research institutes in the world, saw this research and began attempting to replicate the results. Between 1998 and 2003, they published four separate articles on the benefits of floating on creativity, in addition to the other research they were doing. They found thath3despite taking longer to solve problems, the subjects who floated all found more creative solutions , that it could help withh3creativity and literacy skills for those who use English as a second language , that floatingh3increased originality, but lowered deductive reasoning , and finally that floating could potentially beh3a safe way to access altered states of consciousness, which could lead to increased optimism and creativity.

What makes this research so interesting is that so many of these studies took place before smartphones existed. More so now than ever, we live in a distracted, interconnected world, and the issue of “screentime” dominating our daily lives is an issue at the forefront of our society.

It doesn’t take a team of dedicated researchers with decades of studies to understand why floating stimulates creativity, though. It intuitively makes sense. Unplugging and centering yourself in quiet solitude is naturally going to help your mental faculties. Removing all distractions, even gravity, is a great way to rewire your mind and channel your creative energy into the places it needs to go, not just where the world takes it. So what are you waiting for?